The Supreme Court of the United State’s ruling in Birchfield v. North Dakota has resulted in countless appeals all over the country, as defense attorneys and prosecutors try to discern the implications of the ruling. One issue that frequently arises is whether the refusal to undergo a blood test without a warrant is admissible to prove guilt at a trial for DUI charges. The Nebraska Supreme Court recently addressed this issue in Nebraska v. Hood, ruling that Birchfield did not prohibit the introduction of such evidence. If you are charged with a DUI and refused to undergo a warrantless blood test, it is important to know your rights.  A seasoned Illinois DUI attorney can assist you in analyzing what defenses may be available to the charges you face. 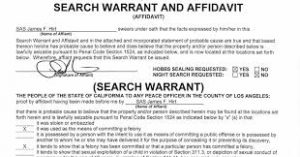 Facts of the Case

Allegedly, the suspect in Hood was driving a vehicle involved in a two-car collision. The driver of the other vehicle died at the scene and a passenger from the other vehicle died 9 days later. An off-duty police officer arrived at the scene shortly after the accident and observed a strong odor of alcohol on the suspect’s breath. An officer who responded to the accident drove the suspect to the hospital. The responding officer also noted alcohol on the suspect’s breath and observed that the suspect’s speech was slurred and his eyes were bloodshot. An open bottle of liquor was found in the suspect’s vehicle as well. When he was asked if he had been drinking the suspect stated he had consumed four beers the night before. He was asked to undergo a preliminary breath test and refused. He was then asked to undergo a blood test and refused that as well.

END_OF_DOCUMENT_TOKEN_TO_BE_REPLACED

Birchfield v. North Dakota, which was decided by the United States Supreme Court in 2016, continues to raise questions in courts throughout the country as to how DUI cases can be prosecuted and what evidence can be admitted against defendants charged with DUI. Recently, in Vermont v. Rajda, the Vermont Supreme Court held that a defendant’s refusal to submit to a blood test could be introduced at trial as evidence of guilt. Illinois DUI law remains unsettled as to whether a defendant’s refusal to submit to a blood test can be admitted as evidence of guilt, but as courts throughout the country continue to face this issue, it is likely only a matter of time before it is addressed by the Illinois courts.

In Vermont, defendants in several cases filed motions in limine to suppress evidence of their refusal to submit to blood tests from being introduced at trial. The trial court granted the motions, based on its belief that Birchfield recognized a constitutional right to refuse a blood test, which the court believed superseded the Vermont implied consent law and prohibited the admission of a defendant’s refusal to submit to a blood test into evidence. The state appealed, arguing that Birchfield held that evidence of refusal to submit to a blood test was admissible at trial, and further, that an amendment to Vermont’s implied consent law rendered the constitutional issue moot. On appeal, the court held that the trial court erred in granting defendants’ motions in limine, reversing the trial court ruling.

END_OF_DOCUMENT_TOKEN_TO_BE_REPLACED

The Supreme Court’s recent ruling in Birchfield v. North Dakota continues to affect DUI law throughout the country. The Birchfield ruling stated, among other things, that DUI suspects who refused to submit to a blood test without a warrant could not be subject to increased criminal penalties for their refusal. Last month, the Supreme Court of Pennsylvania granted an appeal on the narrow issue of whether it is unconstitutional to introduce evidence of a suspect’s refusal to submit to a warrantless blood test at trial as evidence of the suspect’s guilt. While the court’s ruling will only be applicable in Pennsylvania, it is anticipated it will be persuasive for courts in other states ruling on the same issue, and may impact the prosecution of DUI cases throughout the country, including Illinois DUI cases.

The suspect was charged with DUI. Prior to his trial he filed a motion to dismiss the charge, arguing he had a constitutional right to refuse to submit to the blood test, and therefore, his refusal should not be admitted into evidence. The suspect’s motion was denied and the prosecution was permitted to introduce evidence of the suspect’s refusal to submit to the blood test. The suspect was subsequently convicted of DUI.